The life and words of Ashley, Erin, and Michelle

A friend of mine once told me that he thinks children are much more fun than adults any day and that he’d rather hang out with them any day. I can almost agree.

One of my favorite things about really young children is the fact that they tend to be wholly willing to accept who people are, where they are in life. At camp this year, I spent nearly as much time with kids as I did adults, partially for that reason.

When you walk up to someone you haven’t seen in a while, the typical greeting is, “Hi! How’s it going? What have you been up to?” Right? Well, at least it is if you’re an adult. The only thing children care about is what you’re going to be doing with them right at that instant, “What are you doing here?”

Greeting so many old friends at camp proved much more difficult than I imagined this year. After about a day and a half of meeting up with everyone, having to answer that dreaded question of “What have you been up to?” with, “taking care of children,” “looking for a job,” or “trying to keep up with loans.” Having to say that over and over started to chip away at my self-esteem, no matter how much I tried to joke about it.

Whenever I was hanging out with the kids, not one of them asked me how my job search was going. Sure, they were some of the kids I watch back home, but still, not one of them asked if I had found a job yet. Not one of them asked why I still live with my parents; they just think, Why wouldn’t someone live with their parents? None of them make me feel as if I lack in potential compared to the person sitting next to me, they just run up and hang off of every one of my limbs (quite literally at times). More than once during camp, I was invited to stay for dinner or stay to play when I was just walking by a lot. I sometimes stayed or took the kids on a golf cart ride to the “Ark Park” to play, but sometimes, I had places to be, and the look on their faces just about made me cave. In contrast to the feeling that I sometimes overwhelm people my own age with my presence, it’s rather touching. 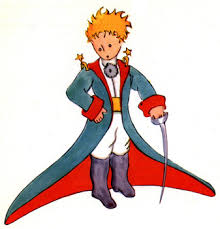 In a way, the Little Prince in Antoine de Saint-Exupéry’s book was completely right. The things that “matter” to many adults (counting money, doing something constantly just to feel “useful,” getting drunk, having a job just to say that you have a job, etc.) are not the things that really matter in the long run. Being passionate about life, caring for the ones you love, those things are important, not worrying about what you do for a living.

While I am not saying that wasting away one’s life doing nothing is something notable, I do think that it is important not to lose sight of the important things that we deal with, the important people in our lives. I know that chillin’ with the kids gives me a boost of self-confidence that I don’t really find anywhere else because they haven’t been bogged down by all the worries and cares in life yet. They generally don’t have loans, jobs, pressure, stress or money issues to worry about yet. They just worry about what toy we’re going to play with next or what new adventure life has in store … and if their friends or “buddies” will be there with them.

And on the other hand, when it comes to thinking like an adult, I think the best part about it is that I sometimes get paid to hang out with these kids.

When I went on vacation with my parents into the middle of the Black Hills, I never expected the wedding fever to follow me. Not that I’m complaining. On the other hand, maybe it’s just that I’m overly perceptive of matrimonial obsession that my life seems to revolve around. I’m not sure.

For example, the first day we were traveling around Deadwood, South Dakota, getting a feel for where we were staying, I noticed a sign for “Deadwood Weddings.” That I chalked up to the fact that I tend to notice a lot of advertisement for wedding-related services and didn’t think twice about it until a few days later.

That’s when my dad and I decided to take a hike up Crow’s Peak. Who would have thought that I’d run across a group of girls climbing this 6.5-mile, 1,500-foot-elevation-change hike for one of the girls’ bachelorette party!? How crazy is that? I mean, I go hiking in the middle of nowhere, and I am still followed by the brides. (It actually sounded like a pretty fun bachelorette party to me, considering bringing along alcohol would just be stupid and a minimal number of people could embarrass the tiara-bearing hiker.)

And to top it off, the night before that, while I was about to take a photo for a girl and her mom at Mount Rushmore, my phone starts to ring in my pocket. It was my friend Lissa. I felt awful when I answered and said, “I’ll call you right back!” and then forgot as the lighting of the carvings ceremony began. I remembered on the way back to our lodge, so I sent her a text to see if she was awake. Unfortunately, reception is so spotty in national parks/forests that I didn’t hear her call back. To the other people in the car, I said something to the effect, “It’s got to be wedding related! I just know it. Who wants to take a bet?” No one took me up on it.

I called her back the next day after the hike, apologizing profusely for not getting to talk to her the night before. I could tell by the way I could hear her smiling over the phone what she was going to ask me when she said, “Erin, I have a question.”

“Oh?” I couldn’t help but smiling myself.

“Will you be my bridesmaid?”

Even though I was standing in the middle of a grocery store, I immediately turned and pointed to my dad, who had been in the car the night before, and yelled, “I knew it!” And then I turned back into the phone and said an enthusiastic “Yes!”

Of course, this just means I’ll have to keep up my at-least-one-wedding-a-year ratio going after she and Jeremy are wedded. So, who wants to be married in 2011?

It’s official, I’m crazy. Cart-me-off-to-the-psych-ward crazy, according to my friends with children. Tomorrow we leave for an 8-hour roadtrip (not counting restroom breaks, nursing stops, and emergency i-gotta-pee-NOW stops, so more like 11 hours), and by “we” I mean me, my husband, my 13-year-old brother, and my 5-month-old son. The Motley Crew Travels to Iowa, Volume I.

What’s the destination? Not a comfy hotel in some nice metropolitan city with museums, zoos, and indoor pools. No, we’re camping. In a tent. On a lake in the middle of Nowhere, Iowa. Did I mention the tent part? Sadly, I’ve been told that tents do not come with built-in AC. Or built-in bathrooms. But I bought a 12-inch oscillating fan from Wal-mart, which I’m confident will protect the four of us from the 95-degree heat and humidity in a small nylon-enclosed space. (Stop laughing, it’s rude. Let me keep my delusions as long as possible, please.)

But before we can embark on this thrilling voyage of bonding, discovery, and excitement, I have to pack. I hope you noticed the pronoun usage in that sentence, starting with “we” and ending with “I”. Because I’m pretty sure my husband believes that a magic genie lives in the suitcase and coughs up shirts, underwear, swim trunks, and deodorant on demand. Although really, what else can I expect from a man who still swears that he has no idea which side of the closet is mine or what drawer to put whose pants in (there’s only one for each of us, and it’s been the same drawer for the entire time we’ve been married), so he can’t possibly put the clothes away. I am 100% serious. Apparently finding clothes to wear and putting them away are two entirely separate and completely unrelated skills.

Rant over. Back to the packing, which I’ve been working on for the last two days and still have not finished. I never dreamed how much stuff babies require for a 4-day trip. And I’m paranoid about forgetting something crucial, like my cell phone charger or diapers. I have a list (actually multiple lists) on my phone, which I refer to obsessively every 5 minutes because my brain is about as reliable as our older-than-me van with 200,000 miles on it. I’ve gathered almost everything into our living room, so if Josh wants to watch TV tonight he’ll have to perch on top of the pool floaty, towels, diapers, paper plates, and various clothing items. The main issue now is fitting everything into our Pontiac Sunfire (with freshly repaired AC – YAY!!), while leaving 10-inch-wide spots for our behinds. I hope Tim (my brother) is okay with holding a cooler on his lap…

Wonder why I’m attempting this? My mom’s side of the family has a big family-reunion shindig every year and this is the 5th anniversary with t-shirts and everything, so we’re the Michigan family branch ambassadors. Doesn’t really answer the question of why we couldn’t reunite at a nice Marriott hotel in Florida in, like, February instead of a blazing-hot Iowa campground in June, but that’s my family for ya.

So there’s the when, where, why, and how of our weekend excursion. Pray that we all return in one piece, don’t leave the baby or my brother, and remember everything important. I’ll try to update while we’re there, or maybe even in the car if I get bored.

I truly hope to talk to you all again, but if I disappear permanently, call the Iowa National Guard and tell them I’m lost in a cow pasture somewhere on Highway 80…